Bio:  Bunmi Africa is an Educational Psychologist, Writer, and Spoken Word Artist. She believes in freedom, hence her drive to share strong socio-political opinions and experiences through performance poetry. Writing is simply one of her ways of documenting and making sense of her perceptions of the world. She sees it as a means to break out of conformity and challenge norms.

She loves the blend of music and spoken words with two EP intro tracks under her belt including “Ariwo Èkó” off the “Ariwo Èkó” EP and “I’m Queen” off the “Project Femme; Alte’cation” EP and an appearance on Headies- nominated rapper, Paybac’s upcoming album.

Bunmi Africa is the curator and co-host of “Spoken Word Lagos,” a quarterly spoken word showcase for Mbari Uno and The Griot Company. She is also the producer and anchor of “Lagos Poetry Sessions,” a weekend poetry radio show on City 105.1FM in Lagos, Nigeria.

RLN: As a spoken word artist what three themes would you be caught performing all year long?

RLN: Who were your early influences that shaped your artistic career?

BA: In secondary school, I barely knew anything about poetry but was always very fascinated by J.P Clark’s poems. Bassey Ikpi, Shihan and a host of spoken word artistes from Def Jam Poetry on YouTube were all people I loved to watch but, I’ve never really felt any direct influence from any artist.

RLN: As the host of Lagos poetry sessions on City 101.5fm do you think having more of this literary showcase would help to give visibility to the under-represented voices in our society?

BA:  Absolutely! It is hard to deny the recent acceptance and appreciation for poetry, especially spoken word poetry in Nigeria. Making it readily and regularly available through the media for people who already love it and introducing the art form to other people would only increase its audience and create a better platform for the issues it seeks to speak on.

RLN: What has the Lagos poetry sessions highlighted so far in the areas of talent and the creative space since inception?

BA:  Lagos Poetry Sessions has focused majorly on spoken word artistes and writers in general. We also celebrate rappers and alternative musicians by playing their music during the breaks.

RLN: As an educational psychologist, has your background influenced your literary career in any way?

BA: It definitely helps in my interaction with the guests and audience.

RLN: What’s your view of the spoken word scene in Nigeria and what support do you think can be given to creatives to engender artistic development?

BA: The Spoken word scene in Nigeria is currently getting larger and seems open for business. While it is fast becoming a popular community, artistes are not being rewarded with their deserved dues like in other art communities like music. The best form of support needed right now is an appreciation for the amount of value been offered through this art form. “Exposure” can’t feed spoken word artistes.

RLN: If you were to advise a newbie to the spoken word scene, what would you tell them?

BA:  Be Original! I see a lot of new guys trying so hard to be like the artistes they love. You will never be as good at being someone else.

RLN: The infusion of music into your performances is flawless, do you play any musical instruments and are there any techniques to note for someone who wants to take this route?

BA: Thank you. I don’t play any musical instruments; I sing in my bathroom, if that counts. If you want to infuse music and spoken word, just listen to a lot of beats and find something that fits your piece or speak with a producer.

RLN: As a creative genius, what would you want to be remembered for?

RLN: Do you have any plans to release a spoken word album or literary works soon?

BA:  Yes! I have an EP in the works. A collection of spoken word poems I’ve written over the years, officially recorded. Some you’ve heard before, others, you haven’t. There’ll be music features.

Inferno Of Silence by Tolu’ A. Akinyemi

Originality as a Beacon of Creative Writing.

Inferno Of Silence by Tolu’ A. Akinyemi

Originality as a Beacon of Creative Writing.

Tolu’ A. Akinyemi hails from Nigeria and lives in the UK where he has been endorsed by the Arts Council England as a writer with “exceptional talent”. Tolu is the author of seven outstanding books, one of which is a collection of ‘short essays’ encouraging you to “Unravel Your Hidden Gems”.

Picture of the Month 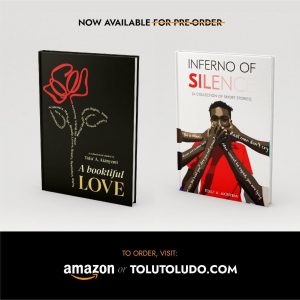